Sabia Smith on After Miss Julie

Ah, that green dress - forget Keira Knightly in Atonement - RADA student of the Technical Theatre and Stage Management Foundation Degree (TTSM), Sabia Smith, has made one just as good. Sabia, who is currently in the second year of the TTSM course, spoke to us about constructing a dress for the RADA production After Miss Julie which played in the George Bernard Shaw theatre this autumn. We asked Sabia about her training, working with the designer of the show, and getting the look just right.

Firstly, can you tell us about your training here at RADA?

In the first year of the course we work across all departments for six weeks in rotation, to make sure we know how all the technical areas operate. I knew I wanted to work in costume and design when I joined RADA but it is really important to see what all the departments do to gain knowledge of the whole production process and understand relationships between teams. I am so glad I got to work in all these areas as it allowed me to learn new skills and really understand the pre-production phases.

So, the dress. You recently worked on the RADA production of After Miss Julie – what was the brief?

From the beginning of the production process for After Miss Julie, the designer, Liam, had made it clear he wanted an amazing dress for Miss Julie because it was such a focal point of the play. The script is meticulous in mentioning characters’ clothing, so there were many discussions about how the dress would look and whether we would make it or source one. I spent a lot of time with Liam looking at references, going to fabric stores, and going over every detail of the dress. We began looking through the RADA costume store and selected a total of about 30 garments to try at the first fitting, but only one of these came close to Liam's vision. It was then that we decided that making the dress would be the only option because of the specific requirements: obviously it needed to suit Lowri (the actress playing the part of Miss Julie), allow for movement, work with the fight choreography in the show, and be resistant to stains.

Can you explain the process of interpreting the brief?

Working off Liam's drawings - my head of department Diane (Di) Favell began drafting a paper pattern whilst I was in fittings with the rest of the cast. We then translated these patterns in toile and, after Lowri came for her first fitting, we made several alterations the dress including the length, neckline and sleeve cut. Liam and I had decided to use an okra green colour which worked beautifully with Lowri's features and auburn hair.

What sort of research did you have to do?

When Liam and I originally spoke he came with hundreds of early 1940's references and fashion magazines. We talked about the requirements of the dress and what it would be representing - social status, time of year, events taking place and so on. From there Liam began narrowing his choices down and started drawing designs which we discussed with input from our heads of department and the director. Once the final design was agreed we began researching fabrics.

How do you go about selecting fabric that works visually as well as practically?

We spent a long time thinking about fabrics and how they looked in different lights, and whether the 'wrong' side of the fabric would look better. After several trips to the fabric shops on Goldhawk Road, we decided we had to go for a synthetic based material, because during the play the dress would be stained with blood - this would allow the dress to be bloodied every night and wash easily. We had originally looked at taffeta and crepe imitations but soon found ourselves looking at chiffon as it has a flow that created a lovely draped look. When we had chosen our fabric, I to tested it to see how it would react to the blood that Props were using, and experimented with the best ways to wash it out after each performance.

When and how do you go about creating the pattern, and what is the process?

Di worked on the pattern originally which consisted of just a front piece and a back piece - rather than four parts (which is the typical construction method), by using two pieces we used less material and were able to alter it quickly. After drafting a pattern we made a toile - a calico mock-up of the dress that allows you to play with the cut of the garment without ruining the desired fabric. After fitting this we redrafted the pattern and I cut the pieces out of the final material. Di and I worked together to construct the sleeves and adjust the lining. It was such slippery fabric that we struggled to get the two panels to match whilst making sure not to alter the look.

Once we were in technical rehearsals we decided to change some elements of the dress, but Di mainly took charge of this so that I could stay in tech with Liam making notes. We added boning in the waist to really pull it in and we decided to put Lowri in a waspie (a small corset that only sits on the waist) to enhance her silhouette.

How do you work with the actor?

Lowri was a wonderful actress to work with as she was patient and honest about telling us if the garment was restricting her movements. She put up with all of us getting her to do ridiculous things during fittings like climbing stairs and dancing because we needed to ensure we had checked every movement and push the dress to its limits. Lowri was very excited to have a garment made, and so was always happy to come for fittings, even if it was just for Liam to see the cut of a sleeve!

Find out more about training in costume design and construction on our FdA in Technical Theatre and Stage Management, and Postgraduate Diploma in Theatre Costume. 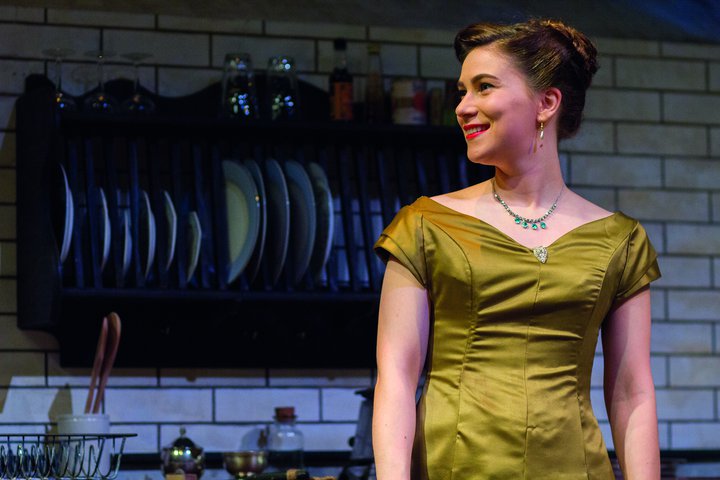