We are delighted to announce the appointment of four new Honorary Fellows, recognising contributions to the theatre industry in the fields of acting, composing and movement.

The role celebrates figures who have made significant impact and contribution to RADA, to training or to the wider industry. Fellows will be invited to take an active role in the life of the Academy including meeting and working with current students where possible.

RADA revived the tradition of Honorary Fellows in 2018 – appointing Cicely Berry CBE, Thelma Holt CBE and Glenda Jackson CBE – in order to celebrate leading figures from across the industry, both high profile and unsung, highlighting transformative work on and off the stage.

RADA Director Edward Kemp said: “I’m delighted that we are continuing the tradition of Honorary Fellows at RADA having revived the role last year. Our new Fellows represent a breadth of talent from many different areas of theatre and film, but all have made a significant to our industry and to drama training at RADA and beyond – we’re delighted they will all continue to play a part in the Academy.”

Mona Hammond OBE was born in Jamaica and trained at RADA in the 1960s. Her career began on stage with credits including Macbeth, Peer Gynt, The Crucible and Fuente Ovejuna, before co-founding Talawa Theatre Company in 1985, which champions reinterpretations of classic plays and new writing informed by the Black British experience. She has appeared in many of their productions, including Blood Wedding, The Importance of Being Earnest, King Lear and O Babylon. On screen, her roles have spanned drama and comedy including EastEnders, Coronation Street, Doctor Who, Us Girls, Desmond’s, Pig-Heart Boy and White Teeth. She was appointed an OBE in 2005.

World-renowned actor Sir Anthony Hopkins trained at RADA in the early 1960s, having made his professional stage debut in 1960 at the Palace Theatre, Swansea. After several years in repertory theatre, he was invited by Laurence Olivier to join the National Theatre Company at the Old Vic, including understudying for Olivier in Strindberg’s The Dance of Death. Other stage credits included Antony opposite Judi Dench in Antony and Cleopatra, Lambert Le Roux in Pravda and the title roles in Macbeth and Coriolanus. Since then his career has comprised memorable screen appearances including his Oscar-winning performance in The Silence of the Lambs, The Remains of the Day, Shadowlands, The Elephant Man, 84 Charing Cross Road, Westworld, War and Peace, King Lear, The Dresser, the Thor franchise and many more. He was appointed a CBE in 1987 and was knighted in 1993. On a recent visit to RADA, he met graduating students from our BA (Hons) in Acting and was presented with his Honorary Fellowship by Director of RADA Edward Kemp.

Stephen Sondheim is one of theatre’s most celebrated composers and lyricists, and has been creating musicals for more than 50 years. He has won more Tony Awards than other composer – eight, including the Special Award for Lifetime Achievement – as well as an Academy Award, Pulitzer Prize, Olivier Award, eight Grammy Awards and the Presidential Medal of Freedom. His acclaimed works include Follies, Company, Assassins, Into the Woods, A Little Night Music, A Funny Thing Happened on the Way to the Forum, Merrily We Roll Along, Sweeney Todd and the lyrics to West Side Story and Gypsy. RADA has a great history of performing his works, with productions in recent years of A Little Night Music (2017), Assassins (2018) and Into The Woods (2019).

Francine Watson Coleman is an internationally renowned movement director and dance consultant. Having trained at the London College of Dance and Drama and the Orff Institute of the Mozarteum in Salzburg, she danced at the Salzburg Opera and was a leading dancer with the Franz Tenta Renaissance Consort. As a movement teacher and director, she specialises in period movement and dance, in particular styles and codes of behaviour, and stagings of Elizabethan and Restoration works. She has worked with countless opera companies and theatres, including the RSC, Donmar Warehouse, Young Vic, Chichester Festival Theatre, Orange Tree Theatre, Abbey Theatre and many more. She has taught at RADA since 1986 and is currently a period style and movement teacher, as well as movement director on many RADA productions.

The Honorary Fellows were officially appointed at RADA’s graduation ceremony on Saturday 13 July. 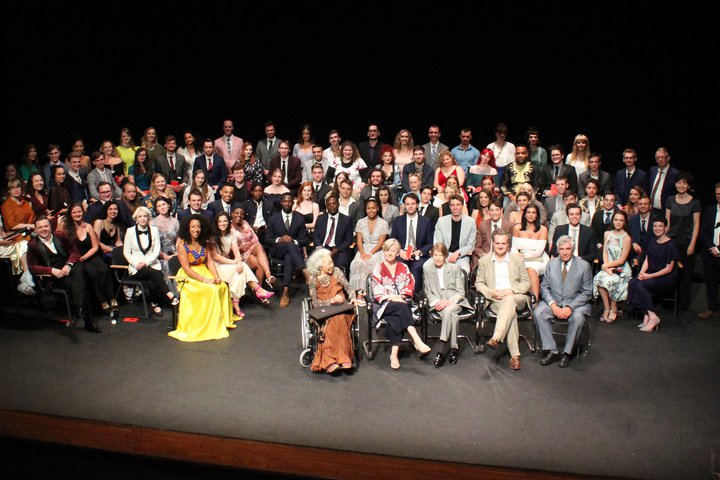