The programme for this year's Bloomsbury Festival has been announced, with several recent RADA MA graduates presenting new work at the festival.

Several students from this year's 2018-19 MA Theatre Lab are debuting work at the festival, having formed collaborations and new companies during their time on the course, in particular in their 'Manifesto' projects. They are part of the festival's New Wave strand, which offers a platform for emerging artists from local academies and universities including RADA and the Slade College of Art.

Gareth is also director, and Viviana Cabral is producer, on The Hamletmachine - a new interpretation of Heiner Müller’s 1977 play that invites audiences to participate as performers or observers.

Gintare Smigelskyte performs Joan's Decision - a charged, physical piece inspired by Joan of Arc drawing on contemporary movement and classical text which explores questions about god, existence and our own morality.

Also performing a solo show is Alistair Hall, who presents his own writing DECLAN: one man's search for his missing friend that becomes a confrontation with the ghosts of his past, present and future.

Other graduates performing at this year's Bloomsbury Festival include Max Attard and Eleanor Neylon, who graduated from the MA Theatre Lab in 2018 and formed Why Theatre Company. Their first show Yellow Cake is a new work in development looking at the impact of nuclear energy on our social psyche - encouraging audiences to face their fears and question what they are seeing and hearing.

be•wilder theatre, comprising 2016 graduates from the MA Theatre Lab, bring their latest show to Bloomsbury having recently performed at the Prague Fringe. Three's A Crowd is a love letter to film and commedia dell’arte, combining mime, comedy, slapstick and dance into a hundred momentous cinematic moments in the space of an hour.

Graduates of RADA and Birkbeck's MA in Text and Performance Cody Freischlag and Adelina Uglow bring Bits & Bobs to the festival: a hard-hitting play about a friendship dealing with the aftermath of suicide, explored through a non-linear series of vignettes.

You can find out more about the Bloomsbury Festival on their website; best of luck to all our students and graduates who are performing! 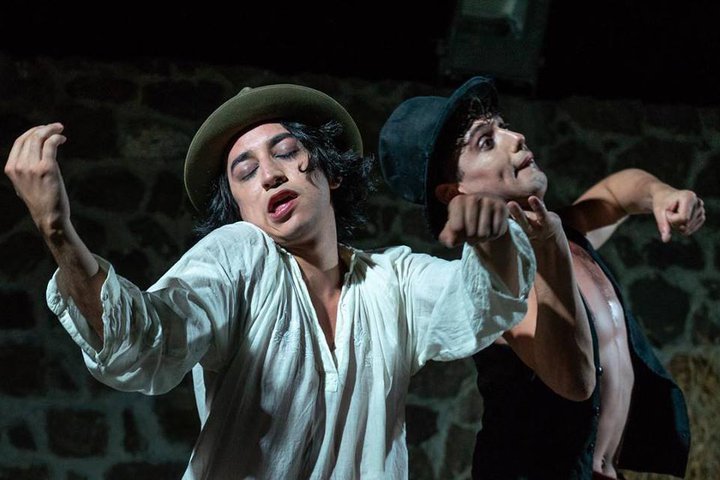