Interview with a graduate: Maya Kazmarski

As Nick Payne’s Elegy finishes its run at the Donmar Warehouse this month, we caught up with alumna of the Technical Specialist Scenic Art course Maya Kazmarski who worked as part of the scenic art team on the show.

What’s it like coming back to RADA? Do you still feel like you’re part of a network of people here?

Well one of the things I notice about coming back to the technical department is that it still smells of soap – it always smelled of soap and experiencing that smell makes me really nostalgic! And yes, you always have a soft spot for the students who come out of RADA because you’re in tune with the training they have. Although the further along I get, the more I realise how much I’ve changed since leaving here so you want to help people understand the journey into the industry post-RADA.

What was your immediate journey after leaving RADA?

I was particularly lucky at RADA because I was sponsored by the Royal Opera House and the National Theatre. I had a two-year apprenticeship that ran alongside my year and a half here; every holiday I was working in one of those institutions. It was amazing because I got so much input from different places, particularly from Hilary Vernon-Smith [former Head of Scenic Art, National Theatre] and Emma Troubridge [Head Scenic Artist, Royal Opera House]. They’ve got really different ways of approaching things so I had a wealth of knowledge bestowed upon me.

After the apprenticeship I worked with Richard Nutbourne, a very well-known scenic artist. The hours were long, the projects were big and timelines were very strict. It was a real learning curve.

I then got a job with the Sydney Opera House for six months, then did another year with Richard before I started working at All Scene All Props down in Kent, where I’ve been for the last five years. We moved workshops two years ago and our space has now trebled so the projects are getting bigger. The company works in a way that I particularly enjoy because I have a lot more responsibility, so ultimately you get more creative licence.

Tell us about your work on Elegy at the Donmar Warehouse.

Elegy was really interesting as we used real raw materials. It was a challenge from my point of view as I wasn’t ‘faking’ anything. For example, we used real metal that I had to treat in a way that wouldn’t rust or be harmful. So I had to do lots of tests and work out what was corrosive, what would change the colour… the designs were unlike anything I’d come across before. We also used a real tree that we cut down from Hampstead, chain-sawed in half (we broke two chainsaws and had to get a bigger one!) and sanded down entirely. The tree had to go inside a glass case, so we had to manipulate it in a way that would fit this restricted frame. It was really interesting and the engineering that goes into that is another whole set of skills that I don’t have personally but I appreciate hugely.

What is your particular role on a project like this?

In this situation, the designer brought the tree into the studio and we all had a meeting about what to do with it. It was a compromise between the logistics, the designer’s aspirations and how I could scenically treat any of the wood that might split – or anything we might have to fake. It’s a collaborative job. We might have cut into it to find it was all rotten. Then we’d have had to fake the inside by packing it with wadding, filling it with polystyrene carving, and painting it to look like wood. You have to look at every eventuality.

Do you have any current or upcoming projects you can tell us about?

At the moment we’ve got Flowers for Mrs Harris in Sheffield, designed by Lez Brotherston. That was challenging because they had to create a cobblestoned floor across the entire stage. There’s also An Enemy of the People at Chichester with Tim Hatley, the designer of Shrek. That was hard work but lovely. When you get a designer like that, it’s really nice because they’ve done it so long that they don’t panic!

How do you plan your schedule for multiple projects?

Projects overlap hugely. Including the shows I’ve just mentioned, we recently had five shows that all went out within a week. When we cost for the shows we make a build sample, which is a small part of set that I’ll paint in the way I’d realistically do it live. At that point I can figure out the best way to achieve what I want in the timescale.

Are some spaces particularly challenging to work in?

It’s more about the set and how ambitious it is. The larger budget projects are usually more difficult. There are so many elements and moving parts to the set, and there’s also a lot of pressure so you get called in a lot.

At what point is your work on a project completed?

After press night we detach from a project, unless the show is very long-running and then there’s always maintenance. The one I’ve had to do the most maintenance on was Top Hat because it was a tap show. It was a brilliant design, but we had to repaint the floor every 6-8 weeks. Initially it was a huge art deco marble design, with different marbles interlaying. As it went on we were having to recreate this marble every few weeks, so it ended up being block colour. You just have to be very flexible with your time – it’s the only way to do a show.

Elegy is currently playing at the Donmar Warehouse. 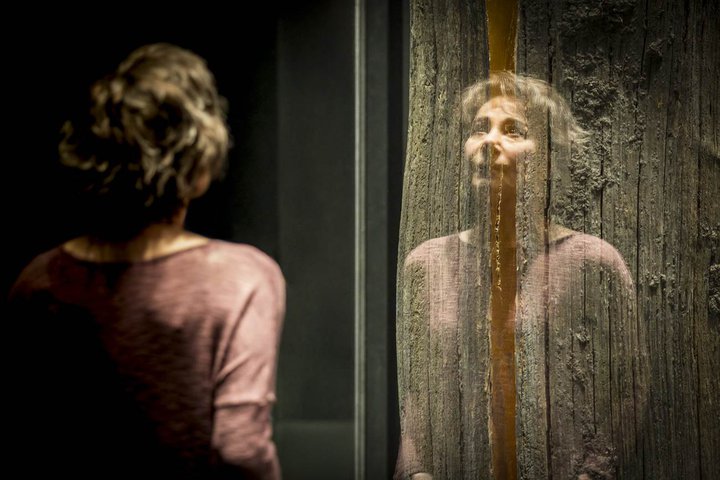