"I have lived passionately unbeknownst to myself": good endings and the inner voice in Woman and Scarecrow

"I looked up ‘passionate’ in the dictionary once because I thought I had never known it. It comes from the Latin, patior, to suffer. Well, I said to myself, if that’s the definition of passion then I have known passion. More. I have lived a passionate life. Yes, I have lived passionately unbeknownst to myself." Marina Carr, Woman and Scarecrow

That statement needs some context of course. Marina Carr’s play suggests that we are never alone; that the voice inside (our head, our interiority, our inner critic and inner pal) is our ultimate and true companion. In this play our protagonist Woman has two voices, two selves, two parts that fight with each other that collude and conspire. One voice is Woman, the other is Scarecrow, ‘the other one / the filthy one who has hounded me down the years’. The Scarecrow is the antagonist, a version of Woman that wanted another life, a different man. The self who preferred smoking and flirting in Paris than hovering and hardship. We all have this duality; the tug of war implied in every choice we made; the knowledge that there are always two roads and in choosing one the other is set in relief.

The relationship between Woman and Scarecrow dramatises the relationship of commitment and doubt. I am reminded of Rollo May’s thesis when thinking about this play. He says that ‘the relationship between commitment and doubt is by no means an antagonistic one. Commitment is healthiest when it’s not without doubt but in spite of doubt.’ In this play Scarecrow is deeply disappointed that the Woman martyred herself to
mediocrity; that she hid behind her children and that she did not leave her husband and eight children for ‘the him that should have been the him’.

The influence of Scarecrow’s rage and anger at Woman’s husband is expressed in all of Woman’s interactions with Him and it is clear that his many transgressions dominate their dynamic. But as the minutes before her departure approach and their fighting softens to affection, we see that there is and was love. As he leaves to bring her champagne for her dying moments she declares to Scarecrow that ‘he was the closest I came to the thing… itself’. These are her dying words. He was the closest she came to whatever she was looking for. She does not say this to him; that would be too giving, too much in service of him, but she says it to herself. She recognises it herself. This discovery enables her to go.

The play is uplifting because of the discoveries that death brings on. She concludes that she has lived passionately because passion means ‘to suffer’ in Latin. She learns that there were moments of alignment with the world. She becomes the epic she has always sought out on her deathbed. She does not die alone. She dies with herself. Her Scarecrow. How we die says everything about how we lived. We are not alone. That brings me relief. That is a good ending. A ‘happy’ one.

Woman and Scarecrow runs in the GBS Theatre from 13-23 March. 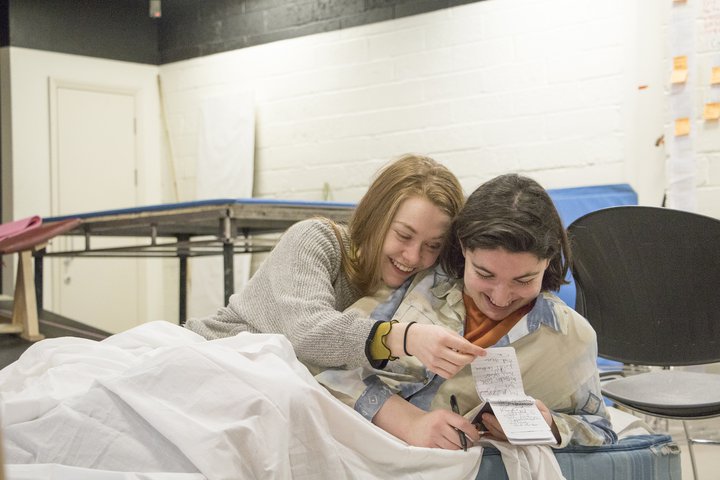