Focus On… Fighting and Stage Combat

Part of the movement team in the Acting faculty, Philip d'Orleans and Bret Yount are stage combat tutors as well as fight directors on professional productions. Here Philip gives an insight into their work.

Both Bret and I are fight directors as well as stage combat teachers. Nearly 20 years ago we completed all of the necessary requirements and were invited to join Equity’s register of fight directors, the UK’s highest professional qualification in this field. Since then we have both developed extensive careers working with a very wide range of live performance venues and companies, alongside work for TV and on a few major movies. And many times we have found ourselves working with RADA graduates we originally trained!

There are a number of aspects to the fight director’s job. Primarily we have to keep the performers safe, and that focus must additionally extend to the crew and audience, who can also get hurt if the violence goes wrong. Keeping everyone safe entails a number of skills: we need to understand how the body works and the many ways it can be damaged, accidentally or by choice; we need a deep knowledge of a very broad spectrum of different fighting arts and weapons; and we need to be able to rapidly assess a performer’s physical abilities along with their personal relationship to violence, and their mental resilience.

Our familiarity with weapons systems and martial arts encompasses an extensive technical understanding enabling us to deconstruct dangerous real techniques and create safe theatrical versions which look just as violent. It also allows us to create visual stories with a wide palette of influences to draw upon.

Which brings us to the real backbone of the fight director’s work: the ability to tell a good story through physical action. A story must work with the performer’s sense of the truth of their character, must support the director’s conception of the arc of the production, and must be textually justified. That story then has to be expressed in choreography, which needs logic (martial, physical, and psychological), surprise, variety, development, climax, and which must be, fundamentally, actable. If there’s no evolving story in the fight, and no journey, the performers will struggle to find their character’s through-line, making the fight harder to perform, and therefore less safe.

Those choreographies of course must be tailored to the individual performer’s physical and mental capabilities, and must be able to be repeated consistently and safely, whilst sustaining a high level of performed aggression. They also have to be right for the period, style and tone of the particular production, and must be playable in the chosen costumes and on the specific set.

Stage combat is a constantly evolving craft, responsive to the growing demands of an ever-changing industry and an ever more perceptive audience. One of the great pleasures for us lies in responding to the provocations of each new production with its unique challenges, constantly learning and stretching our own creative abilities, and then bringing that hard-earned knowledge back to RADA to share with our students. Being able to apply in the classroom exactly what’s happening now at the cutting-edge of our profession, preparing students for precisely what the industry is asking of them at this moment, is both a privilege and intensely satisfying. 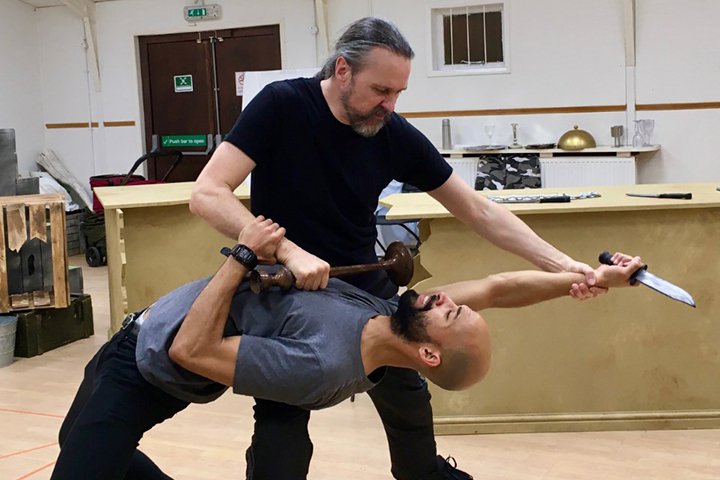