Focus On: Movement at RADA

Lead Movement Tutor Shona Morris explains how movement is taught on our BA (Hons) in Acting with our trained expert practitioners.

Acting is a physical activity: film, theatre, TV and even radio require many different physical skills. For example: being able to be still; to move as different characters; play in different theatre spaces; navigate complicated sets; wear costumes, shoes and wigs; handle props; be able to breathe so as to speak complex text; be able to inhabit a character fully; and last but not least, to find the physical world of the play and work as an ensemble on stage together.

In addition to this, an actor needs to be able to fight, and to act and dance in different styles and periods to reflect the social and political world of the plays.

The acting movement syllabus has four core elements: work on the body (alignment, flexibility, strength and stamina), work on a role (character, expression, mask work, chorus work, moving indifferent spaces and creating an ensemble), dance and fight. The syllabus is delivered intensely over two years, marked by key moments such as the fight test, animal study and period dance presentation.

In the third year there are technical classes once a week and movement input on shows. The key influences are Lecoq, Trish Arnold and Laban, but many new practices are emerging. All our students have weekly Alexander Technique classes and access to a physio, to support their journey of understanding how their bodies work.

Before a rehearsal period, the Lead Movement Tutor, Director of Actor Training and Director of RADA consult the show’s directors about each production’s needs, which will be delivered through coaching, movement and fight direction, or choreography. The work on the shows follows a professional model, though the main emphasis will be on enabling the students to physically inhabit their roles as much as directing the movement.

Even when there doesn’t appear to be a lot of movement on a show, there will have been a movement practitioner working on it. The movement team attend rehearsals, create movement sequences, and coach or assist the director to find the physical style and life they need for the production. It is a role with many hats! It is necessary to read the plays to do this, and there are many shows at RADA – so it is a lot of preparation and planning over three terms.

We have specialists on our faculty in fight, movement direction and choreography, but occasionally we also draw on a wider pool of movement practitioners who teach here from time to time. As an audience member watching the shows, it’s interesting to consider the work you see on stage as the end of a long journey for the student – one that starts on day one of their training, by learning how to roll down the spine and swing an arm in rhythm, and ends with them creating worlds and characters entirely different from themselves.

The three productions in the second half of our autumn 2019 season are fascinating physically, and could not be more different. In Close Quarters, we needed to make sure the actors moved like soldiers, but not so tensely that their voices would be damaged. We have worked with the Soldiers’ Arts Academy and movement director Louise Kempton, who was on a placement here during her training at Guildhall so knows the students and the work.

The Laramie Project requires a nuanced and transformative way of becoming different characters – and there are many of them! The transformation is subtle and led by the text. For this our movement tutor Katya Benjamin has provided careful and creative support.

Tales from the Vienna Woods is set in Austria in between the war and has challenges like older shop-keepers, old women and a cabaret with outrageous acts. It is a very particular physical world and there are changes of scene, acts and some moments of cruelty. I have done the movement on this show, referencing in my research the painters of Otto Dix and Groz, and obviously the balls of Vienna and the inter-war year German cabarets. The director’s references have also included films and the cast have added their own research. The style we have is a collective one!

I hope you can see how wide-ranging the subject of movement at RADA is – as at all drama schools. RADA is holding a Movement Symposium this year to discuss movement training and its importance in the industry. We will be bringing together both international movement practitioners and theatre directors. Further information will be on our website shortly. 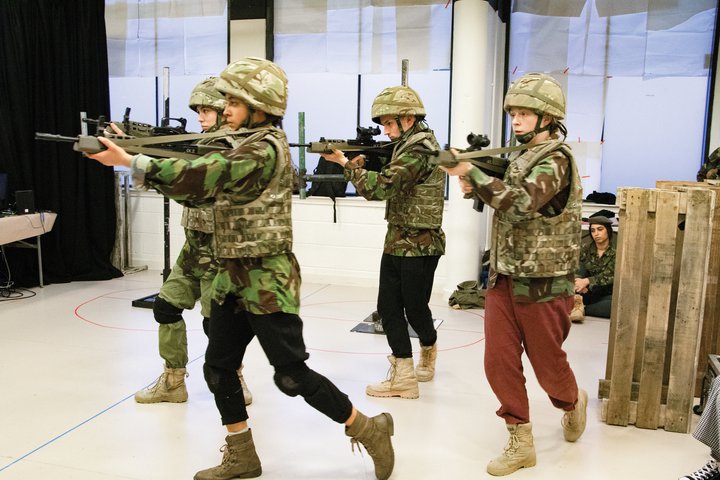