Écoute Theatre, co-founded by RADA graduate and artistic director Zoe Templeman-Young, have transformed their play Take Care into a filmed documentary series telling the stories of carers across the UK, featuring many RADA graduates.

Take Care premiered as a stage play at the RADA Festival 2019, and subsequently won an Offies Commendation at VAULT Festival. It has now been developed into a docudrama: Take Care (The Unheard Stories), a new heart-wrenchingly hilarious series, created in partnership with Pound Arts, delving into the messy real lives of carers for the elderly.

Zoe graduated from RADA in 2017 and established Écoute Theatre with co-artistic director Sam McLaughlin. Both Zoe and Sam have experience of caring for family members from a young age.

Zoe said about the project: "Working with such a diverse and talented cast, we were able to create whole worlds out of single, isolated interviews. I’m extremely proud that we have produced a unique, hugely entertaining and compelling series to watch. For an audience there is something so special about knowing all the words come directly from real people. It creates a whole different kind of experience - it’s intimate, nuanced and completely addictive".

"When casting, I had two very clear objectives in mind - to cast actors who were a good, close fit to the real people, and actors who bring their hearts to a part. RADA graduates always seem to work from a connected, sensitive place - and working with those cast in this project was honestly a privilege and a joy".

"The biggest takeaway from my training at RADA is the importance of working from a truthful place in yourself. The idea of giving yourself to a part, rather than bringing the part closer to yourself, could not be more applicable than with Take Care. It is an honour to be entrusted with these stories - and I'm glad that we have been able to create such an exciting, honest, joyous series that has also brought together some RADA graduates during such a difficult time for actors, the arts and carers".

Take Care's verbatim scripts are crafted from interviews with carers for the elderly and other key workers over the course of six years. The stories take audiences on a journey through the care world, starting back in 2014 and ending in the present day, including the effect that Covid-19 and lockdown has had on carers and their loved ones. From Graham, an activity co-ordinator who accidentally starts a spaghetti fight in a care home; to Lin, a daughter whose mother keeps forgetting she has cancer; to Anya, a Russian carer who keeps getting proposed to.

The direct address, Talking Heads-style monologues, filmed during lockdown, confronts the audience with a raw, heartfelt, layered and unapologetic insight into what it really means to “care”.

The films are a development of the original stage play, which Zoe first presented at the RADA Festival: "Being a part of RADA Festival was an invaluable experience, and to premiere Take Care at RADA was something I'm immensely proud of. Working with such a skilful team ensured that some of the slighter madder moments of the show (like a hospital bed and hoist being whisked onstage mid-show) were run extremely smoothly. The lighting and sound technicians were as good as professionals and worked like they'd been part of the team since day one. It makes me look forward to bringing another show to the RADA Festival".

Take Care (The Unheard Stories) will be available to watch for free of charge from 26 November on Écoute’s YouTube channel. 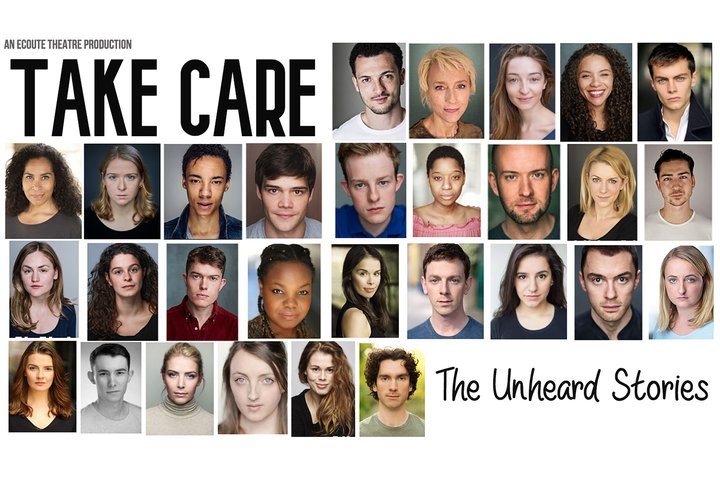